Hofner Club 60 with “Bigsby” Tremelo Arm
Made from the late 50`s with ebony fingerboard and an impressive amount of mother of pearl inlays, highly figured bookmatched maple back and rims and a pearloid scratchplate and control panel. Finished in either Blonde or Cherry Sunburst, at the time would have set you back around £40.The Club series had a height adjustable bridge and could also be adjusted for intonation, by setting the individual saddles, which were short lengths of fret wire, into one of 4 precut slots running the length of the bridge, forward to sharpen and backward to flatten.The diamond logo pickups were used between 61-63.
“The mini bigsby arm on this particular guitar was probably not standard and was possibly added later”. 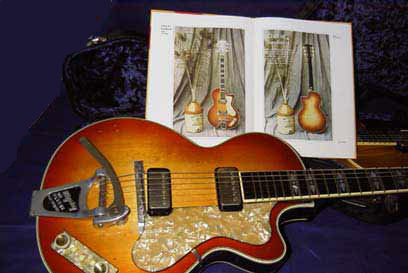 Hofner Club 40
As with the club 50`s these were laminated with spruce veneered tops and plain maple rims and backs, the necks were maple and were reinforced with a central beech strip, topped off with an unbound ebony fingerboard, the single pickup gives this guitar a characteristic warm tone ideal for rythm work, very light construction these are beautiful guitars to play, though abit delicate compared to today`s guitars.This particular guitar is an earlier example, with the Hofner logo running down the headstock, this was changed later to the stave and treble clef motif found on other models.

Hofner Senator c.1956
Quite an early model I think. No Hofner logo on the headstock just three dots and a tortoiseshell pickguard with what I believe is an added tone control. Still playable and with a neck more akin to a baseball bat than a guitar!

This particular Hofner President was imported from Singapore and there is a small badge on the back of the headstock to clarify this, unusually, no serial number is present. This guitar is fitted with a Burns Vibrosonic tremelo, soon to be removed!

Hofner President
Not very much known about this particular Hofner President, surprisingly nice sound and still playable even after all this time, probably built around the same time as the other two.

1963 Hofner Galaxy
Hofner’s attempt at a Fender Stratocaster. Fitted with three pickups and a multitude of tone and selector controls.
This particular guitar is in fine condition and all the controls now work, thanks to our guitar technician. Surprisingly good sounding pickups for the time and this Galaxy plays pretty well.